The southbound lane of traffic is currently 40′ wide. The target lane width for a main street is 10′.

Much has been said about Chicago’s desire to raise revenue and increase safety on City roads by installing speed cameras at parks and schools around Chicago. Though this maybe a short term fix, I argue here that poor roadway design encourages speeding and gives drivers the opportunity to take risks to pursue the fastest route.

The street in question here is Kedzie, beginning north of the intersection at Belmont.  I live about a block away from here and from Logandale Middle School.  The location is a short walk or bike ride to Jewel, Revolution Brewery, the Belmont Blue Line station, and the Belmont bus.  That walk or bike ride, however, can be unsafe, unhealthy, and even dangerous.  The video below shows vehicles traveling south on Kedzie where drivers are given the opportunity to pass each other on the right in an effort to beat the traffic light at Kedzie and Wellington; the northwest corner of Logandale Middle School. http://www.youtube.com/watch?v=MUdgmBgGsPw

The roadway should be designed so drivers naturally arrive at a speed that is safe for them and pedestrians. Narrowing lane widths as part of what CDOT describes as a road diet will encourage this behavior.  BWLS has a series of recommendations that would increase pedestrian, bicyclist, and driver safety:

Sidewalk is covered in pigeon excrement and is not ADA compliant.

Below is a concept for a new median on Kedzie, which would calm traffic and make it easier to cross Kedzie at Barry by creating a protected refuge in the middle of the street.

Recently, concrete forms have been added underneath the bridge along Belmont which eliminate the space where the homeless people camped.  These ‘anti-homless’ barriers prevent people from sleeping there, but they also create a sidewalk which is not visible to the street.  Because it is now a secluded space, it may increase the risk of attacks along this sidewalk.  See this article in DNAinfo.

Alderman Mell has recently indicated that TIF funds will be used to create buffered bike lanes along this stretch of Kedzie which BWLS greatly supports.  We recommend making the street safer for pedestrians as well. 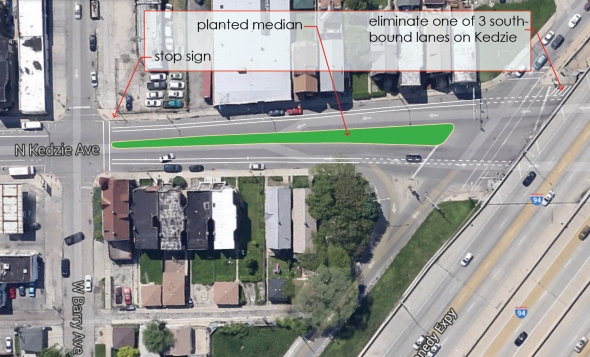 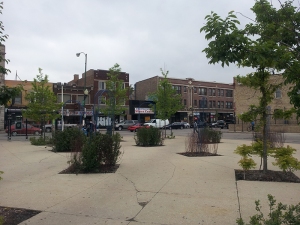